I am taking an example of the economy of Pakistan which had a structural change in 1993 Monetary policy. The data starts from 1976 to 2015. Source of the data is from State bank of Pakistan Statistical handbook.

What is Regression analysis ?

To understand the structural changes of the economy we first have to create our model of dependent and independent variables.We know that the overall effect of the independent variable of CPI and Real GDP would cause an effect over the Money Supply (Broad Money, M2) of the Economy. Thus, we can write the equation in the following way:

To understand the structural change in the Economy of Pakistan we take a time-series data from 1976 to 2015. The source of the data is from Handbook of Statistics of Pakistan Economy from State Bank of Pakistan. For the above equation the following data was collected:

We will be using double-log at both ends of the equation. Econometricians use natural log for various reasons in regression analysis. The important reasons for taking a double log at both ends for this equation is as follows: 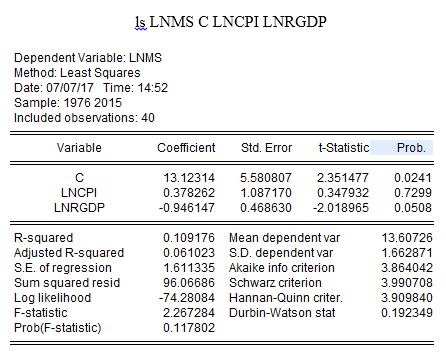 The following command was written in Eview 9.5 student lite version for run the regression of our equation

Interpretation of the result

The result shows that the P values are quiet high, which leads us to the analysis that the CPI is insignificant. (No relationship between Inflation Rate and Money Supply of Board Money in Pakistan)

With regard to the Independent variable of RGDP, it shows us that 1% increase in real GDP would lead to a decrease of -0.9% in MS. The p-value for this coefficient is significant enough which shows there is a strong relationship between Real GDP and MS. (5%). Let us add a structural change dummy variable to understand the exact effects. 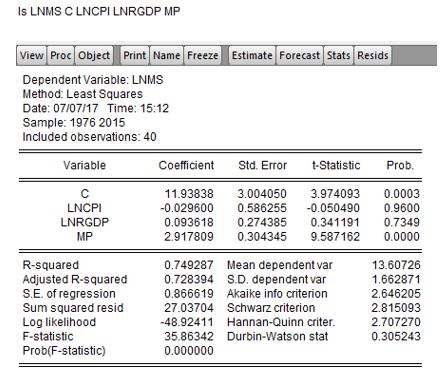 For the Coefficient of Real GDP, we can interpret that a 1% increase in the RGDP would lead to a 0.09% of Increase in the Money Supply (Board Money-Dependent variable).

The structural change of 1993 of monetary policy is about 2.91 which is statistically significant this shows us that there have been changes in Money supply in pre and post-1993.

The R2 value of 72% and an Adjusted R value of 74% shows how well the independent variables of Inflation and Real GDP has explained the model. So higher R values show regression with a good fit. (Note that we always get a high R2 in a time series data because of the significant trends within the observations. Whereas in a cross-sectional data we get a low R2.

Thus, the inclusion of the dummy variable of Structural change of Monetary Policy of 1993 in the regression, show highly significant p-value, which leads us to the analysis that there have been structural changes in the economy.

The forecast for the result is as follows: 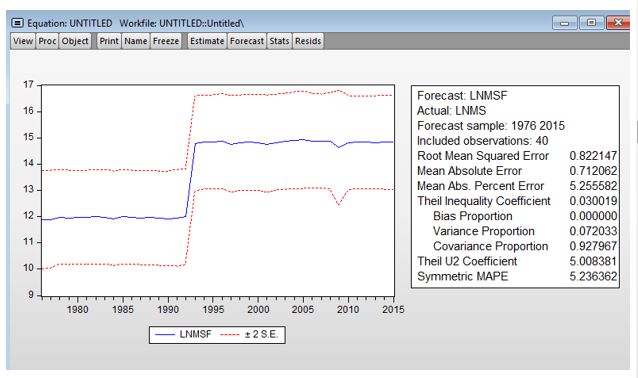 The forecast clearly shows the structural change of the intercept dummy variable of 1993 in the equation.