“Regression is a process by which we estimate one of the variables, which is dependent variable, on the basis of another variable, which is independent .”

The above equation is called linear equation. It is the usual practice to express relation between the variables in the form of equation. Such an equation connects the two variables. To solve such equation, first of all we need to collect data showing corresponding value of the variables, which will be further be considered for solving the problem. Suppose X and Y denote the respectively the heights and weights of students. Then a sample of n individuals would give the heights as

and the corresponding weights will be as

Properties of Relationship between Two Variables:

The relationship between two variables is divided into four categories, which as follows; 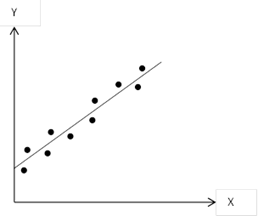 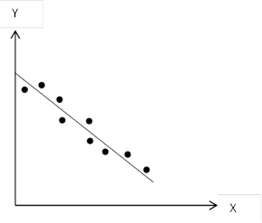 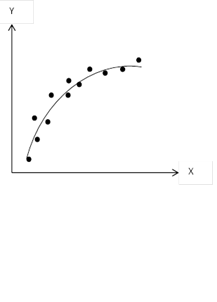 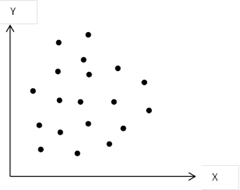 “Of all the possible cures or lines which can be drawn to approximate a given set of data, the best fitting curve or line is the one for which the sum of squares of deviations, which is the vertical distances between the observed values and the corresponding estimated values, is least.”

It is the requirement of the least square method that the sum of squares of the vertical deviations, the distances, from the points to the curve or line is minimum. Therefore, if

represents the vertical deviations from the points to the line A, as shown in the following Graph 5, then the curve or line has the property that 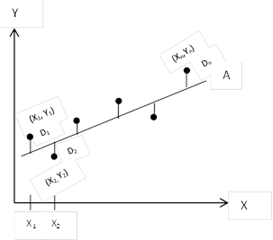 . The normal equations for regressions are as follows;

The second equation is obtained by multiplying the linear equation by X and them summing both sides of the equation.

By solving Eq. (i) and (ii) simultaneously we the equations for solving the constants a and b, which are provided below;

The normal equations will become as;

And the equations for constants c and d will become as;

. For the following values of X and Y. Find the estimated values of

The following Table 20 will be used in solving the problem.

Putting the values from Table 2o into the above equations, we will get the following;

Substituting the value b in Eq. 2

Thus the equation of least square line is

Find the least square line of regression for the following values of X and Y, taking

i. X as independent variable

We will solve the problem by using the formulas for constant a, b, c and d.

For X as independent variable, the least square line for regression will be

For Y as independent variable, the least square line of regression is