What is Regression Analysis ?

In Econometrics, we use the tool of Regression Analysis to understand the economic relationships through quantitative estimation. This quantitative estimation is done by Regression which is one of the most frequent and important tool used to understand economic theories. Hence, it is easy to describe a relationship in a theoretical form but it would be difficult to write it in the form of an equation and estimate the theory by a given data. Also, not only do we find the relationship of the variables but the direction and the amount of change in the variables used in the theory. Thus, To predict both the factors of 1) Amount of change 2) Direction of change as well as the significance of the relationship between the variables, we use Regression Analysis.

Important point :  Other names of Dependent and independent variable.

To understand the relationship of dependent and independent variable in regression analysis : Let us explain it by an example:

This equations explains that Quantity demanded is a function of all these variables. Any change in these variables will change the Quantity Demanded (keeping other things constant ).

Simple regression model is a single equation linear model which can be explained in the following way :

Why do we call it linear ?

The model is linear because of the following reasons: 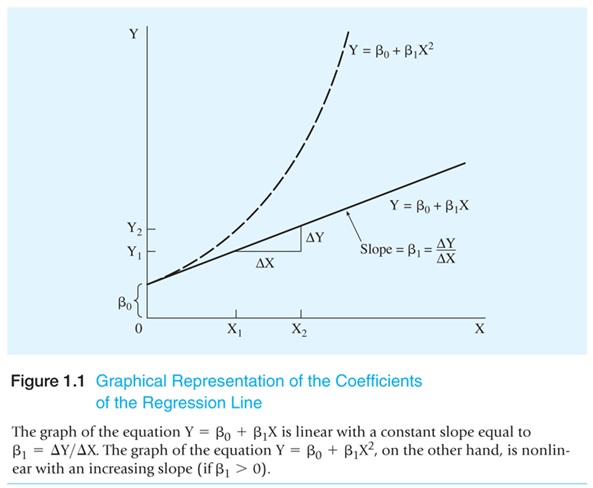 Remember that the βs determine the coordinates of straight line and βo is constant or intercept term which shows the value of Y when X is Zero.

Also note that in regression analysis the emphasis is more on the slope coefficients like β1. In the above straight line regression, the slope is constant throughout the function. and a constant slope means that a one unit change in X will lead to the same amount of change in Y.

Whenever you run a regression in any software, the gist of the whole equation is that it should be linear. And if it is not linear than you have to make it linear before you run regression analysis.

A linear equation is :

The above equation is a non linear , rather a quadratic equation over which we can run regression in any software available. To make more easier for us to run regression analysis, we attempt to make the equation linear first. To do that , we create a new variable which is equal to the square of X.

The equation can now be estimated by regression analysis as it is in linear form.