By Definition, Dummy variables are Indicator, Categorical and Qualitative variables that are used to quantify the qualitative, nominal scale variables by giving them the value of 0 and 1.

In simple words, we come across variable which are non-numerical in their attributes or you may say qualitative in nature. For regression, such variables are to be given a value which is done in the form of a dummy variable. This is the reason that a dummy variable is also called an indicator or categorical variable which actually indicates all those non-numerical categories by giving them the value of 0 or 1.

Let me explain how can we use dummy variable in a function and how do we interpret the terms written in that function. For example: Using a wage function example:

Now these are the dummy variables. When we run a regression of this equation in eviews, we will come up with a solution somewhat like this: 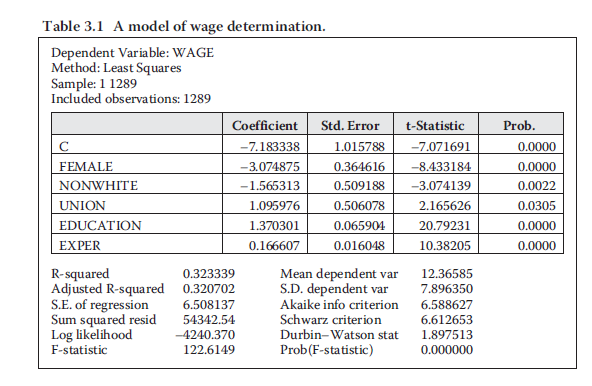 Dummy variables and the Intercept

There are some important point you need to remember before you use regression analysis with dummy variables.

How would we interpret the female dummy coefficient?

Remember that we explained that whenever we are interpreting the dummy variable, we have to refer to the benchmark or comparison category.

So the female coefficient of -3.07 means that “The average hourly  salary of a female is less than $3.07 compared to the average salary of a male worker (the benchmark category)

How to interpret the Nonwhite Worker?

Note: Each dummy variable must be interpreted with its benchmark category mentioned before in the model.

In the above example another way of understanding the importance and relevance of how good the data is that is being run by regression can be seen by the P-value. We can see that all the variable have 0 or close to 0 values which means that the dummy coefficients that we just interpreted are highly significant.

These dummy coefficients in the above example are called differential intercept dummies as they show the difference in the intercept values of the category that gets the value of one compared to their benchmark category which has a value of zero.

To make it more easier to understand , remember that the dummy variables which are attached to the coefficients are called “Differential Intercept dummies”

Common intercept Value: How to interpret the intercept in Dummy variable equation?

In the above example of wage function, the regression solution gave us the intercept value of -7.18? How do we interpret this value?