Before preparing frequency distribution it is necessary to collect data of the required nature from the various sources. The data collected is always in raw form which is needed to be arranged in a proper arrangement for the purpose of inferring the required results. You need to do certain preparations for frequency distribution, which includes the classification and tabulation of data. Both of them are explained in detail as follows;

Collected data are usually available in a form which is not easy to comprehend. For  example, if we have before us the marks obtained by 1000 universities students at their Undergraduate Examination, it would be difficult to tell simply by looking at the marks as to how many students have marks between 300 and 400, between 400 and 500, and so on. In order to get the clear picture of the situation, the data must be present in a manner which is easy to understand. As first step, we arrange the data into classes and categories having similar characteristics. For example, we may arrange the marks into groups of 50 marks each, e.g. 300 t0 349, 350 to 399, 400 to 449 and so on.

The collected data can be classified by many characteristics, there are four main basis of classification are mostly being practiced. These bases are;

A table is a systematic arrangement of data into vertical column and horizontal rows. Tabulation of data on population of a country can by classified on the basis of religion, gender or marital status. Tabulation may be simple, double, triple or complex depending on the nature of classification, which is being used by the statistician.

Let us consider the weight of 120 students at a university, as given below;

From the above provided data it is difficult to draw any meaningful conclusions. As in, it is difficult to tell simply by looking at the above data as to how many students have weights below or above 150 pounds or between 150 and 200 pounds and so on. Therefore, necessary to arrange the data in such a way as their main features as clear. Conclusion can easily be drawn if the data is arranged in an array. An arrangement of data in ascending or descending order is called an array.

From the array many question regarding the data could be answered. But still it will be difficult to look at 120 observations and obtain an accurate idea as to how these observations are distributed. Therefore, we can arrange them in better form. For example, the data may be arranged into classes as shown in following Table 1. 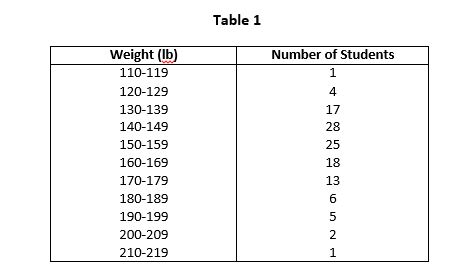 By arranging the raw data in the above form we have distributed the data into classes and determined the number of items belonging to each class i.e. class frequency. The range of data from 110 to 119 is a single class and 1 is it’s corresponding frequency. Such an arrangement of data by classes together with their corresponding class frequencies is called frequency distribution or frequency table.

The class boundary can be obtained by adding the upper class limit of one class to the lower class limit of the next higher class and then dividing by 2. Mathematically it can be represented as follows;

For Example, Class boundaries for first class in Table 1 is calculated as;

The Class Marks or Midpoints

The class mark or midpoint can be obtained by adding the lower class limit and the upper class limit or class boundary of a class and dividing the resulting figure by 2. Mathematically it can represent as follows;

For Example, Class mark of the first class in Table 2 below, will be calculated as;

The following Table 2 shows the class boundaries and class marks for the corresponding classes,

Formation of a Frequency Distribution

Following steps are involved in the formation of a frequency distribution:

For the purpose of determining the classes for the frequency distribution there is no hard and fast rules for the purpose. Mostly, 5 to 20 classes are being made. The number of classes should be appropriate, so that could be distributed and represented properly. If we have less than 5 classes, it will result in too much information being lost. On the other hand, if we have more than 20 classes, computation will become unnecessarily lengthy. In Table 1 we have made 11 classes.

The lower class limit should cover the smallest value in the raw data.

The class frequencies are obtained by distributing the raw data measurements into the classes made. The number of measurements falling in each class is referred as it frequency.

There are two methods for arranging the observations in their proper classes. Such methods are as follows;

In this method of frequency distribution, each observation is listed in its proper class. The following Table 3 illustrates the tabulation of weight measurements of 120 students. This is called entry table. 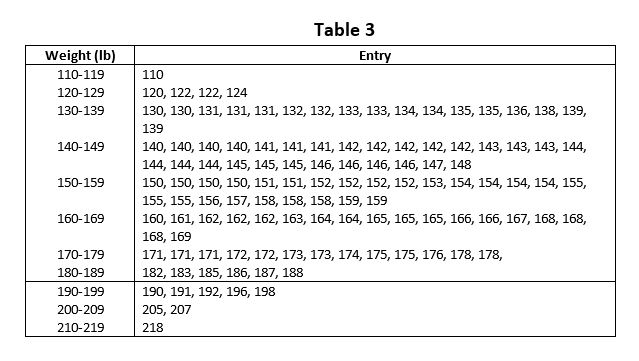 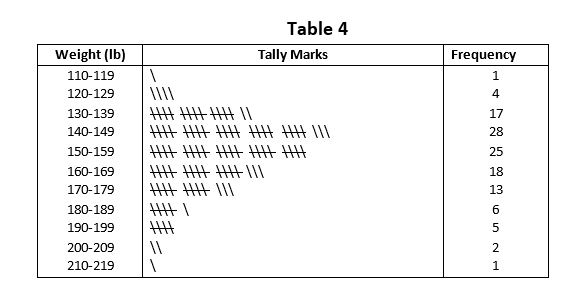