Factor and determinants of growth in China

The process of economic growth is a complex phenomenon, which involves a wide variety of factors, such as political, economic, social, cultural, etc. It is commonly believed that capital appears to be the primary determinant of economic growth as it drives the development of small and medium businesses. However, researchers such as Baizhu Chen and Yi Fheng consider this statement to be wrong as economic development has much to do with human resources, social environment, and political conditions (Chen & Feng, 2000).

Capital is a sufficient condition for further progress, but it is not always necessary. For instance, if you have a look at Chinese economy, it is possible to say that the implementation of open door policy in 1978 served as a defining event that initiated a free market reform. This step was a time-consuming process since it took two decades to finalize it (Yuing, 2016). Nonetheless, after 20 years of struggle, China managed to reach impressive results in the global arena. This article aims to look at all determinants of economic growth in China, which converted the country from an impoverished introverted region into a thriving free market economy (Guru, 2017).

According to a renowned researcher in the field of economic growth, Supriya Guru (2017), political factors drive business development. The government should be interested in economic growth and set up conducive conditions for corporations to develop inside and outside the country (Guru, 2017). If we consider Chinese case, it is possible to state that non-democratic and authoritative regime made it possible for country’s authorities to introduce European-style free market economy and maintain control over industries and political system. Total control over decision-making process allowed politicians to prevent numerous problems and eliminate risk, which led to positive results.

In 1953, the Chinese government adopted the law, which gave a right to politicians to introduce any reforms they consider to be necessary. In such way, country’s authorities implemented their Five Year Plan (2011-2016), which presupposed spending 2.2% of GDP on research and development (Yuing, 2016). This step fostered the technological development and led to a significant improvement in production. State manufacturers could upgrade their equipment and introduced many innovations in this sphere, which enhanced the quality of the final product and attracted foreign customers (Guru, 2017).

As mentioned above, the transition from social market economy to open market served as a defining moment for the country. This process started in 1978 when Deng Xiaoping, Mao’s successor, decided to bring an end to Chinese isolation and introduced the reform, which attracted foreign investors to the region. It also allowed entrepreneurs to start their own business, removing price controls and privatizing state institutions. All these actions were controlled and evaluated by the government so that politicians could take appropriate measures to avoid unfair business practices. Before the reform, the country had gone through a difficult time of Cultural Revolution, which took lives of citizens and led to severe destruction in all sphere. The Chinese ruler realized the need for significant change, which could enhance the quality of life in the country and strengthen their country’s position in the global market (Guru, 2017).

Nowadays, the Chinese economy is growing at an average of 9.5% every year, and private sector brings 70% of GDP (Yuing, 2016). The country started to interact with the external world and became members of various international organizations. For instance, in 2001, China had entered the World Trade Organization, which opened new opportunities to local corporations. This step increased international trade and fostered further economic growth (Guru, 2017). The following graph illustrated the

[dynamics of Chinese economic growth in the period between 2004-2009: 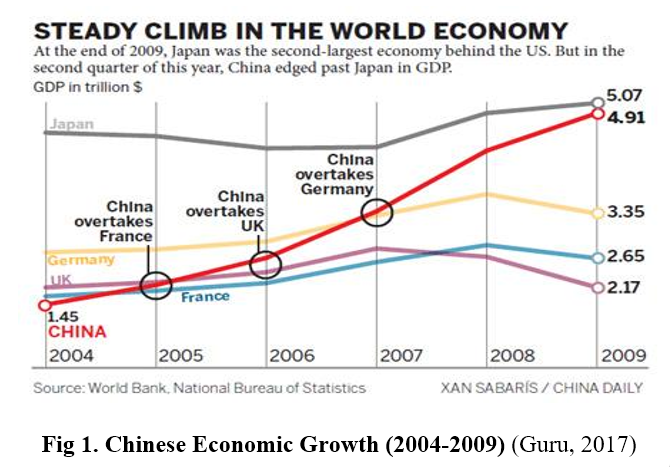 As it could be observed, in 2009, China has become third-largest economy behind the United States of America and Japan. At the end of 2009, the total GDP was estimated at  $ 4,91 trillion, which is an impressive result. In a short time, the country managed to make a real breakthrough and restructure its economy (Yuing, 2016). Nonetheless, in 2010 the situation got worse due to world economic crises and severe inflation. China started to lose its position in the global arena, which had an adverse effect on its GDP. The following graph illustrates Chinese results in the period between 2004-2014: 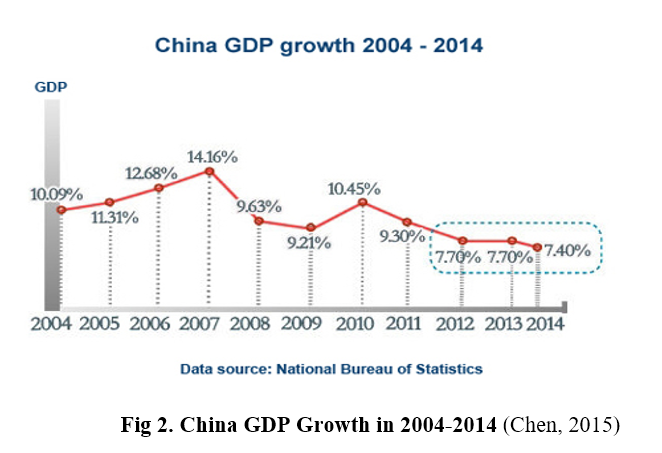 The Chinese population is considered to be one of the fastest growing in the world. According to the recent statistics, the country’s population was estimated at 1.3 billion. There is a plenty surplus of a cheap workforce in China, which is doubled by rural migrants. Due to the introduction of new technologies in agriculture, many employees were unemployed, which forced them to move to urban areas in search of new jobs. In 2011, it was estimated that approximately 500,000 of citizens migrated to cities from countryside and villages (Guru, 2017). Additionally, aggressive restructuring of rural areas and new manufacturing settlements initiated voluntary migration, which resulted in the surplus of cheap labor in the region. This fact attracted many international corporations, which established enterprises in the area and provided people with workplaces (Gram, 2008).

This trend was relevant for many years until Chinese working-age population has plunged over the last couple years. The country’s one-child policy introduced in 1979 restricted families from having many children. This step reduced the number of workers in the country since Chinese working-age population was used up (Gram, 2008). Additionally, the shift of employees from agriculture to industrial sectors had also slowed down. Companies begin to complain about the lack of labor and professional workers. Specialists require higher salaries since the demand for high-quality labor force has significantly increased. Jonathan Anderson, a famous economist, and writer believed that the annual growth of GDP might decline if the government does not take any measures to improve the situation in the region (Gram, 2008). The following graph illustrates the demographic trends in Chinese labor market: 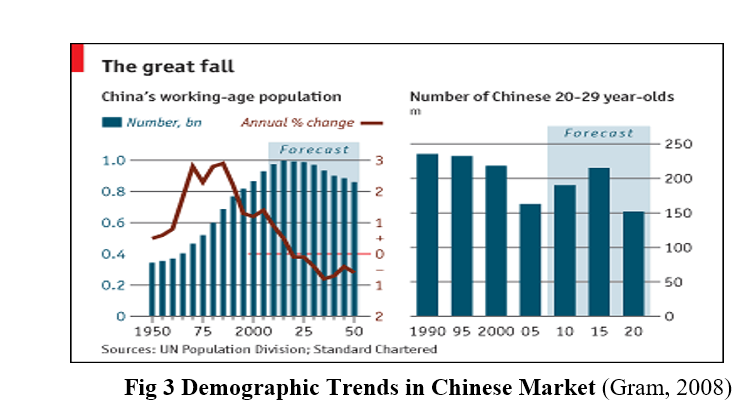 The unemployment rate has significantly fallen in China over the last several years. Nonetheless, the lack of workplaces in the past attracted foreign investment from Europe and America. Professionals in China earned ten times less than their colleagues in Asia. Companies provided their workers with lower salaries, which had a positive effect on profit margin and sales figures. However, as it was mentioned before, the situation started to change over the last several years. Therefore, some international corporation, such as Nike and Adidas, decide to move their production to areas with cheap labor.

High Participation of Females in Workforce

China is the country where it is common for females to work in various industries. Chinese rate of female participation in the workforce is the highest after the Netherlands. The state’s one-child policy presupposed that women would be involved in child-raising activities for a shorter period, which would allow them to take an active part in the economic and social life of the country. In such way, females received a chance to work and allocate more time for career development. International corporation appreciate diversity since it is seen as a popular trend in the global market. This factor also attracted foreign investors and allowed companies to make their staff more diverse. The following graph represents women’s workforce participation by country (Guru, 2017). 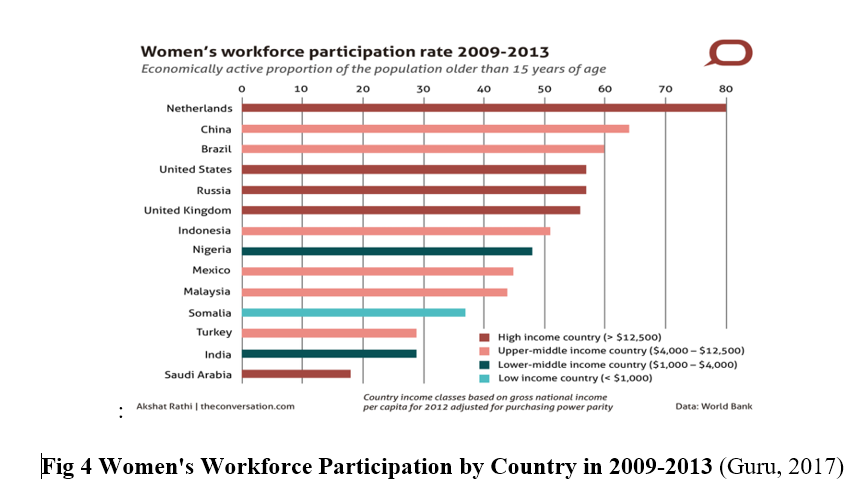 One of the main steps in Chinese open market policy was to encourage foreign investment that will foster economic growth in the region. For this purpose, the government created Special Economic Zones or 14 Open Cities where country’s authorities creative conducive environment for the development of international business (Yuing, 2016). Transnational Corporations were provided with tax incentives and bonuses to set up new manufacturing settlements. These organizations provided Chinese citizens with workplaces, which significantly reduced the high unemployment rate in the country. For example, EUPA, a Taiwanese manufacturer of coffee machines, is operating in one of these regions and employs approximately 25,000 workers (Yuing, 2016).

Till 1970, the government did not allow citizens to start their businesses since it focused on state institutions and encouraged people to work for the country. However, after the reform was adopted,  individuals received a chance to set up companies and develop own business. Nowadays, approximately 70% of all organizations are privately owned (Yuing, 2016).

Economic growth in China was caused by a wide range of factors. Open-market reform introduced in 1978 served an as defining moment in the history of the country. This law attracted foreign investment and opened the region for international market players. Additionally, aggressive restructuring of rural areas and voluntary migration helped to reduce wages, which allowed the international corporations to enter Chinese markets. Political factors are also significant since total control of decision-making process and internal operations allow the government to monitor the economic process and eliminate potential risks.