We know that when it comes to people demand for money – there are 3 elements that has the ability to change the decisions of the individuals in either spending more or less. And these elements are:

In generally we also know that the amount of cash people want to keep depends proportionately on the prices of those products or transactions made. As prices and wages rise, household would want to keep more cash with themselves. Demand for money is considered to be a function of 3 factors :

And the money demand will rise if the Price level rise, Interest rate declines or Level of Real Income (Output) increases.

By the word Aggregate we can easily incur that Aggregate Demand is the total demand for goods and services in the economy. To derive the aggregate Demand Curve, we have to examine what happens to the aggregate Income (Output ) when there are changes in the Price level of the products and services.  Additionally, we have to assume that the monetary policy variable as well as the fiscal policy variable are constant. So the government is not showing any response to the changes in the price level.

From the Above graph we can see that an increase in the PRICE LEVEL increases the demand for money as people want to keep more cash to fulfil the requirements. Which shifts the Money demand curve to the right.

Now remember that w have assumed no action is taken upon the rise in price level. So the quantity of money remains constant. To equilibrate the money market, there is a rise in the interest rate .And with a higher interest rate , investments projects goes lower as well as planned investment spending falls. Also, a lower investment leads to lower planned aggregate expenditure (AE). In such case, inventories are greater which enables firms to cut back production leading to a lower output. A vice versa situation if the price level declines.

Now the whole scenario leads us to  two case

If the price level increases the Aggregate Demand will decrease

If the Price Level decreases the Aggregate Demand will Increase.

And the negative relationship between the price level and the aggregate demand is called the Aggregate Demand Curve. 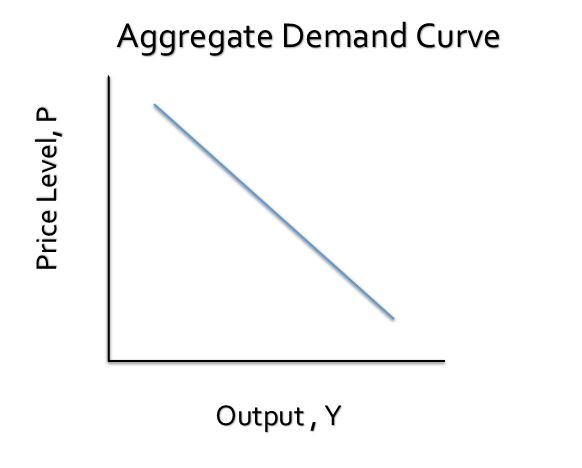 Each point on this curve shows an equilibrium between the goods market and the money market.

When the price level increase the aggregate demand decreases because the higher price level effects the demand for money to rise. And with the constant money supply , to establish a money market equilibrium the interest rate rises. AND IT IS THE INTEREST RATE THAT CAUSE THE OUTPUT (INCOME) TO FALL.

Others Reasons for a downward sloping Agg. Demand Curve

There are two other factors that makes a downward sloping aggregate demand curve.

The consumption link is another reason for the downward sloping AD curve.

In general, the more wealth household have , the more would they consume. And we know that wealth includes a lot of elements such as bonds, stocks, shares, cash and housing etc. So if the wealth decrease, there will be less consumption now and in the future aswell.

The element of price level has an effect on some types of wealth. Suppose if the price level rise – the wealth you currently hold in your checking account will decrease by the amount the price level has increased. Because you are not able to buy the same amount of product as you could before the increase in the price level. Thus, your purchasing power (real value of your wealth ) decreases.

Note: This topic is also called the Real balance Effect.

So What is Aggregate Expenditure ?

Aggregate expenditure is simply C +I +G or a combination of COnsumption by Household, Investment by businesses and Government Expenditure. And at an equilibrium point this planned Aggregate Expenditure is equal to Aggregate Output of the Economy which we also called as Income, denoted by “Y”

Notice when the Price level rise it is this Aggregate Expenditure that is effected or in other words decrease which leads to a download sloping Aggregate demand Curve. However do not confuse yourself by thing that the planned expenditure represents the Agg. demand curve. Because the Agg. demand curve represents much more than that. At each point of the curve of Aggregate Demand, the Aggregate Expenditure is equilibrated to the money market and the good market at a particular given price level.

Up Next : Shifts in Aggregate Demand Curve