Whenever policy makers want to measure the impact of a change in prices on consumers, welfare analysis comes into play. Given that reforms adopted can either create or destroy value, an assessment is needed of whether the measure taken will increase or decrease the consumer surplus.

There is a broad range of reforms that can utilise welfare analysis and these include but are not limited to subsidies, transfer programs, health care reforms, environmental policies and educational reforms. Contrary to popular belief, welfare analysis is not something that only economists should deal with. In fact, microeconomists in this case are those who can observe the real world and determine whether the policies being implemented have strong micro foundations or not.

The first one who tackled the consumer surplus concept was not an economist, but a French engineer called Jules Dupuit. In 1850, as he was working as a civil engineer, Dupuit was preoccupied with the benefits or rather losses of taxation of subsidising public projects such as the construction of a bridge.

However, between 1939 and 1944, Sir John Richard Hicks came up with a simple, straightforward way of analysing the consumer surplus by offering a graphical interpretation. As we are going to see below, the benefit to consumers from a change in price can be estimated through the area under the demand function, in Hick’s view.

The first substantial assumption is that we are dealing with a closed economy and only two goods, say X and Y. Another important assumption is that a consumer of goods X and Y is rational and wants to maximise his or her utility, subject to a budget constraint, named in the Fig.1 as B1. Point A, where the indifference curve of the utility function is tangent to the budget line is the optimum point.

A change in price, say a decrease of the price for good X from p0 to p1, will make the consumer want to buy more of good X which becomes cheaper and less of good Y. This trade-off between the two goods is of course due to the budget constraint. Otherwise, with unlimited or growing income, the consumer will buy more of good X without reducing the consumption of good Y. The budget line shifts from B1 to a flatter one, named B2. The indifference curve changes as well, from U0 to U1 and the new optimum is reached in point B. 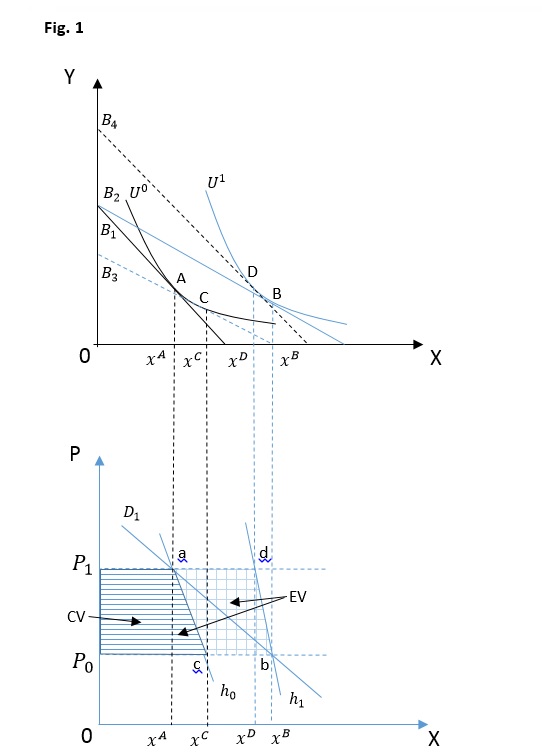 Using algebra, the substitution and income effects, as well as the total price effect can be shown through the Slutsky equation below:

Here, xi denotes the demand for goods x1, …, xn, pj stands for prices of these goods and M is the money income. The first term of the right hand side of this equation which is the Hicksian demand curve or the constant utility demand curve plots the substitution effect of a price change, while the second term of the right hand side is the constant money income demand curve also known as Marshallian demand and it shows the whole price effect, that is to say both the substitution and the income effects.

Weaknesses of the Hicksian approach and more recent alternatives

This relation shows the main caveat of the Hicksian approach to welfare analysis which is the assumption that the income effect can be treated as zero. If the income effect is different from zero, the area under the demand function is not an accurate estimation of the compensating variation or the equivalent variation.

More recent research into the consumer surplus and welfare analysis argue that the benefit to consumers from changing prices is not well estimated by the area under the demand functions. Instead, other measures are proposed, such as the sum of areas to the left of consumption loci (Camm, 1983), as this takes in consideration not only price changes of several goods, but also price changes across different markets.

In the aftermath of the financial crisis in 2007-2008, welfare analysis has been applied at the macroeconomic level as well, yet not drawing so much on the good old Hicksian demand curve, as newer and more accurate models have been built. Implications of signing trade agreements or the importance of capital insurance as a tool to hedge systemic risk of large financial institutions are just a few such examples.