The idea of probability is familiar to everyone. In our daily life we make statements such as the following;

In all these statements there is lack of certainty. The theory of probability is an interesting branch of Mathematics. It has its origin in the game of chances. It plays an important role in making decisions in situations where there is lack of certainty. During the seventeenth century, the gambles call upon the mathematicians to provide them optimum strategies for various games of chances so as to increase their chances of winning. The modern theory of probability has wide applications in the fields of insurance, business and biological and physical sciences.

We shall start our study of the theory of probability by introducing some concepts such as experiments. Sample space, events etc.

In Statistics, the term experiment is used in a much wider sense as compared to some subjects of Sciences such as Physics and Chemistry. For the purpose of theory of probability we use this term to describe any process which generates raw data. For example, the tossing of a coin is considered an experiment or sometimes a random experiment. Other examples of experiments are; rolling of a die, selecting a bolt from a lot and observing whether it is defective or not, and many more. All such experiments have two properties in common, which are as follows:

2. We are certain about the outcome or the result of the experiment.

The set or collection of all possible outcomes of an experiment is called sample space. It is denoted by S. Each element of a sample space is called a sample point. 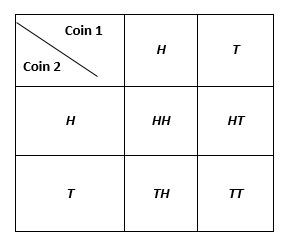 5. Suppose a coin is coin is tossed three times or three distinct coins are tossed simultaneously. There will be 2 x 2 x 2 = 8 possible outcomes. Thus the sample space of this experiment will be S={HHH,HHT,THH,HTT,THT,TTH,TTT}

6. If a die is rolled twice or two distinct dice are rolled simultaneously, there will be 6 x 6 = 36 possible outcome as shown in the following Table A. 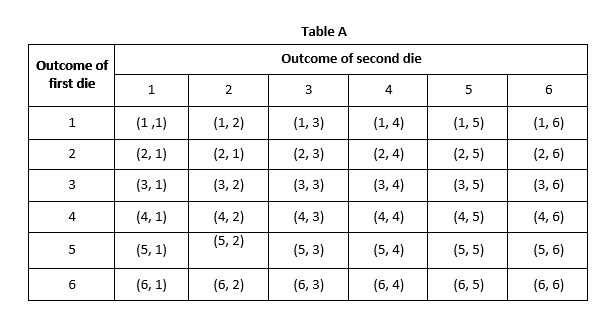 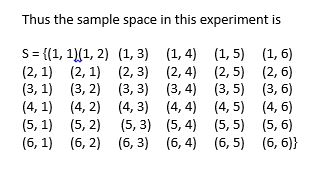 The possible outcome of an experiment is called an event. Thus an event is a subset of a sample space S. events are normally denoted by first few capital letters A, B, C etc. For example, when a coin is tossed, the sample space is S = {H, T} and the subset A = {H} is the event that a head occurs. When two coins are tossed, the sample space is S= {HH, HT, TH, TT} and the subset B = {HH, HT, TH} is the event that at least one head appears when two coins are tossed. We say that an event A occurs when any one of the outcomes in A occurs.

Since, events are sets; hence we have algebra of events corresponding to the algebra of sets considered before. By using set operations on events in sample space S we can obtain other events in S as defined below;

1. The Certain or Sure Events

An event comprises of the sample space S itself is the sure or certain event since an element of sample space must occur.

An event consisting of the null set  is called impossible event because a null set contains no outcome.

The set of the possible outcomes in the sample space S which are not in the event A is the complement of A relative to S and is denoted by A’.

The union of two events A and B, denoted by A  B, comprises of those outcome which belongs to either A or B or both A and B.

The intersection of two events A and B, denoted by A  B, consists of those outcomes which are common to both A and B.

Outcomes are said to be exhaustive if they constitute the entire sample space. For example, if we tos a coin, the possible outcomes are head and tail. There is no other possibility; the coin will not stand on the edge. Similarly, in rolling a cubical die, there are six exhaustive outcomes which are 1, 2, 3, 4, 5 and 6.

Up Next : Probability Definition , Formula, Examples