A production function indicates the highest output Y that a firm can produce for specific combination of input.

We have many factors of production used as inputs but for simplicity we will focus only on labor and capital as a factor of production. Keeping this assumption we can write the production function as :

This equation shows that the output Y, relates to the quantities of inputs of Capital K, and Labor L. Additionally it is important to know that Inputs and Outputs are both FLOWS.

The Short Run Versus the Long Run

It takes time for firms to increase their output. Probably because they would require new plants to build or add extra machinery and some other capital  ! And such activities can easily take a year or more to complete. As a result firm do have constraints for many reasons when thinking about increasing their production. Such a constraint in a factor of production that remains fixed or cannot be changed is considered to be the SHORT RUN period of a firm. That unchangeable factor is called the FIXED INPUT.

It is a period when a firm is able to change all of its factor of production easily. Or the amount of time needed to make all production inputs variable. Now there is no hard and fast rule for distinguishing the short run and long run. In fact it depends on case to case basis. Additionally , we must also keep in mind that in the long run firms can vary the amount of their input to minimize the cost of production. 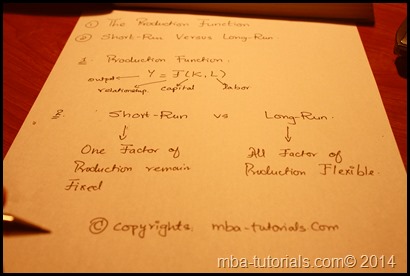