Perfect Competition vs Monopoly (In Detail)

One of the very important Perfect and Imperfect markets namely Perfect competition and Monopoly has always been studied in every foundation course of Economics. These are the distinguishing features of both the markets.

Perfectly Competitive Market – Perfect competition –  Many sellers and many buyers

One of the important assumptions of Perfect competition is Free entry and Exit. In other words, it means that there are no special costs associated with entering or exiting the market. As a consequence buyers can also shift from one supplier to another and suppliers too can easily enter or leave the market in case if they are making no profit.

Monopolist, the complete opposite is an imperfect market that produces a unique product and is the sole seller of that particular product. It has barriers to entry in the form is Patents, licences or copyrights etc that halts other companies to enter in the same market for profits.

Are you interested in creating an Academic Blog just like econtutorials.com ? Check my detailed step-by-step tutorials of creating your own blog in 2018. 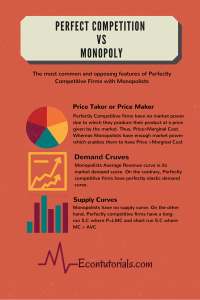 Monopolists being the single seller of a product, enables them to have monopoly power because first it doesn’t lets anyone else product the product through barriers to entry and secondly, Uniqueness make it charge more from it customers.

Whereas, perfectly competitive markets has Product homogeneity as one of its core assumptions. Each firm produces the same product as the other which means that Firm A cannot afford to charge high because firm B is producing the same product.

Perfectly competitive firms are always considered to be Price takers because they have a little share in the market and thus cannot effect the market  even if it does changes it price. Rather it will lose its own customers if it does so. Hence, market price is given to them.

Monopolist, having a market power enables it to charge its product higher and has it own ways to measure the optimum point of producing and charging its product.

Perfectly competitive Market is highly concentrated due to which the firm faces a perfect elastic demand curve. Meaning that the percentage decline in quantity demanded is greater than the percentage increase in price.

Are you interested in creating an Academic Blog just like econtutorials.com ? Check my detailed step-by-step tutorials of creating your own blog in 2018.

The common feature of both of the markets is there Profit Maximization point which is Marginal Revenue = Marginal Cost. In case if any of these markets movie from this point will either lose profit or increase its costs and would eventually reach to this point to equalize.

Demand Curves of P.C and Monopoly

The Demand Curve of a Perfectly Competitive firm is Perfectly Elastic (Horizontal line) and its market demand curve is downward sleeping.  This means that no matter how much the output is produced, it will have no effect on the Price given by the market. Because the market price is determined by the industry demand and supply curve. Moreover, the Demand curve of the Perfectly competitive market is also the Average Revenue, Marginal Revenue and Price of its Product.

Perfectly competitive markets have Zero economic profit or a normal return of investment i.e; competitive . A state of neither gain nor loss. Also no firms can enter in the long run as all are earning zero profit.

Monopolist gains profit because it charges high (Price>Marginal Cost). It will lose its profits if its lose its market share.

Perfectly competitive firms has two cases, it can either temporarily shut down or continue producing at a loss. The shut – down point  is the point where Price of the Product < Average Variable Cost. Thus, if the per product cost of producing every unit is higher than the price you are selling it , the firm has no choice but to shut down the firm.

Monopolist buys its input just like a competitive firm buys its own units. Thus, there are no special input prices for monopolist and its buy in the same market like any other firm of any other market.

With regard to Perfect Competition, the long-run supply curve depends on the extent to which increases and decrease in industry output affect the prices that firms must pay for input into the production process.  In this analysis, there are 3 types of industries.

Long-Run Supply curve is upward sloping -When Demand Increases, prices Rise, Quantity Increases–> new firms entry causes an increase in supply- With no effect on input prices , firms entry occurs until it reaches back to its original price.

Long run Supply curve is Horizontal- When demand increases, Price Rise , Quantity Increases– With an effect on input price (prices rise), the long run Price would be higher than the initial equilibrium.

Since perfect competition produces at a point where Price = Marginal Cost. It has no dead weight loss and at this point the product is efficiently produced.

However, as we know that monopolists charges high having P>MC so instead of producers it will be the consumer who will lose consumer surplus as well as a deadweight loss in the society.