There is a very basic concept of understanding Profit maximization either for Perfect Competition or another market model. For almost all markets, the concept is similar.

If Q is output of the firm, Total Revenue is :

So a profit for a firm is the difference between the Revenue it receives and the cost it incurs during the production process. Which also means that firms chooses output at that point when revenue and costs are at its maximum and minimum point respectively. Graphically the greatest distance between the two shows the Profit level.

Do not forget that when discussing revenue, we have already described in our previous lectures that if a firm wants to sell more of their  product quantity requires a reduction in their Price . And if the firm or producer tries to raise price (especially incase of perfect competition, the sales will become zero) 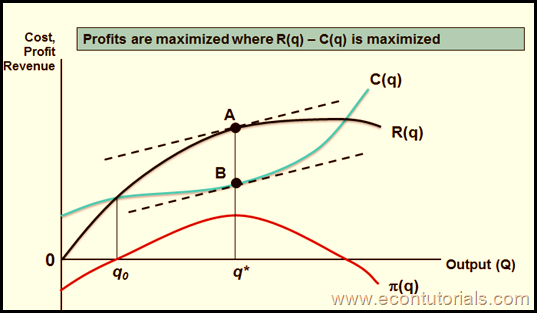 (Upnext: When and How to choose an output in Perfect Competition Short Run Period)