As defined through the production approach, GDP represents the total value of goods and services produced within the borders of a country, during one year period. If this value is expressed in current prices, we have nominal GDP. However, using nominal GDP to measure the size of an economy may not always be the best approach. During inflationary times, when prices increase significantly, nominal GDP will also increase, thus sending a false signal of a performing economy, when people’s standard of living will not benefit from this increase in GDP.

Hence, a more reliable way of compiling GDP is to measure the value of goods and services in terms of constant prices. This indicator, also known as real GDP, can provide a more accurate estimate of a country’s productivity, correcting for the fluctuating prices and only showing how quantities produced change from one year to another.

To illustrate just one example of how nominal versus real GDP indicators work, take the case of a country producing goods and services totaling $30 billion in 2010, and $33 billion in 2013. While during the three years period prices have increased with 10 percentage points, have people living in the respective country benefited from the increase in nominal GDP over the three years? The response is, of course, no. Even though their salaries may have risen, this is purely due to inflation, which translates into a general price increase. 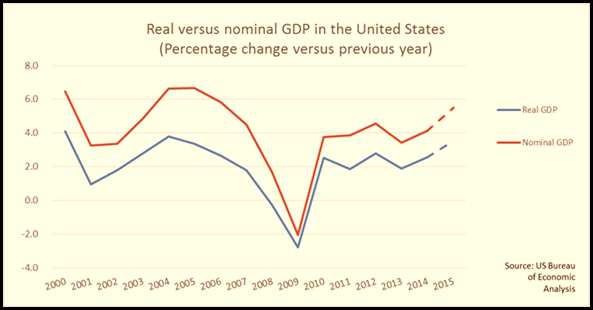 So dividing nominal GDP by real GDP, you get GDP deflator which actually shows how much prices have changed in one year. In other words, GDP deflator is a measure for inflation, during one year time.

Other indicators similar to GDP

How is Real GDP calculated in United States ?

Coming back to the nominal versus real GDP, in the United States, real GDP is calculated by the Bureau of Economic Analysis starting from the nominal GDP and omitting imports, income earned by American companies and American citizens abroad and adjusts for the exchange rates.

Moreover, in the United States, the BEA eliminates the inflation by subtracting from nominal GDP the implicit price deflator, which is the ratio of what goods and services cost today, comparing to a base year.

To sum up, although GDP is currently the main tool to measure the size of an economy, there are other things to consider when we do the calculation. As shown above, ignoring inflation would not do anything but send a false signal about the economy, since people’s living standards remain unchanged. That is why, indicators like real GDP are intended to provide a more accurate measure of the productivity of a country.