Monopoly: What you really need to know about Monopolists?

We use this word of monopoly commonly in our lives. Sometimes we are referring a person having a monopoly power and other times speaking in the language of business and Economics, Firms having monopoly power. So what is this Monopoly Power ? They say that Monopolists are those who have market power ! So what’s Market Power ? And even if monopoly has market power, what impact does it have on its revenue ? Does it even matter to the consumers when they are buying a product from a monopolist ? Well ! Let us discuss all these questions step-by-step to clear out a lot of misconceptions about how monopoly and monopolists work.

Market Power: Market Power is the ability of a seller having an impact over the price of a good.

Which in other words simply means POWER of a buyer or consumer to have any impact over the price of a product. When i say buyer we also have a concept called MONOPSONY. (More on that Later)

Monopoly by Definition: Is a market in which there is only one seller of a product.

Although Pure Monopolies are rare. Because we always substitutes of almost all the products. But somehow we do have markets in which only few firms compete with each other. You can say Airline companies, Electric companies etc.

Generally, Monopolists have lower quantity of their good and charges very high . (How selfish that is eh! ). But that’s why they are called Monopolists. How do they do that ? Read Below.

Monopolists have Market Power or having the ability of effecting the price of a Product. Because as a sole producer, it is not worried about any competitors who could capture its market. (Note: This doesn’t means that monopolist can charge any price. Especially if its interested in having higher Profit level). Lets define the basic concepts first.

Average Revenue : is the Revenue received on each unit sold.

Marginal Revenue: Change in revenue because of one unit change in Output Produced.

Note the Average Revenue of a Monopolist is also the Market Demand Curve. 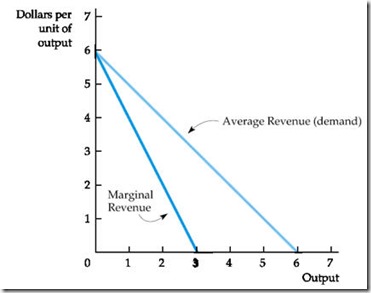 When a monopolist tries to sold its product at a higher Price, It will earn nothing. So revenue increase only when the monopolist decreases the Price of the Product. But why do we have the Marginal Revenue or the additional revenue below the Average Revenue? Well! When we said that a decrease in the Price leads to an increase in the quantity Sold. This also means that a decrease in Price would lead to a lower additional Revenue compared to the Last one !

When Marginal Revenue is Negative—>Revenue is Decreasing.

This raises another Question: If Monopolist decreases its Price for selling higher quantity. How and why do we say monopolists earn more than other competitive markets ? Read the Next Topic and you will know….