When firms have some control over the price of their product, we call it an IMPERFECT COMPETITION. This also means that the firm has MARKET POWER; ability to raise price without losing all of the quantity demanded for their product.

So when we are talking about PURE MONOPOLY, we must keep in account of the following:

But also WHAT PRICE TO CHARGE FOR THEIR OUTPUT ?

1.Entry of new firms is blocked

2. Firms acts in a way that its sole purpose is to maximize profit

It must also be mentioned that a monopolist buys its factors of production just like any other competitive firms. so the labor it hires or the service it requires for the sole production of that product. Additionally, with regard to the cost side of the firm, every monopolist tends to reduce its cost which does not differs from other competitive markets. The difference comes at the point when we are analyzing the demand side which i am going to discuss below.

We nee dot add few more assumptions to make it more simple to understand the whole process. First we need to assume that monopolist does not charges different prices to different customers i.e; price discrimination. It sells its product to all demanders at the same price. We also assume that firm faces a downward demand curve. And by knowing the demand curve it faces, the firm simultaneously chooses both the quantity of output and the price of that output. So when the firm chooses the price, the market determines how much to be sold. This also brings us to the point that monopoly chooses the point on the market demand curve where it wants to be.

Like any other competitor, a monopolist will choose to produce as long as Marginal revenue exceeds marginal cost. And because the market demand curve is also the demand curve of the monopoly, it is downward sloping. 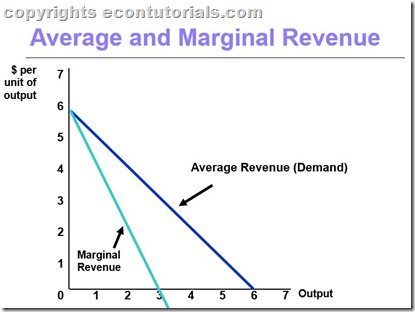 Relationship of Average revenue and marginal revenue in monopoly

Average Revenue is the price per unit sold and is precisely the market demand curve of monopoly. Concerning the relationship of Average Revenue and marginal Revenue, we must keep in account of the following facts

What Quantity should Monopolist Produce ?

We know that Profit maximization point is MR=MC. Lets graphically analyze how a monopoly decides to choose its price and quantity. 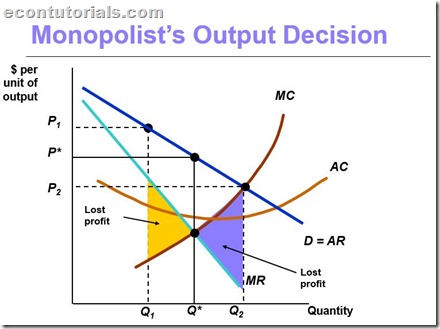 According to the above graph, Q* is derived from MR=MC intersection that corresponds to Q*. And P* is corresponded from demand curve. Now there are 2 cases incase if the monopolist does not produces at Q*:

Thus, both the cases are not recommended for a Monopolist.