Let us first distinguish between GNI, GDP and GNP to understand how is GNI different from these two measuring indicators.

GNI compared to GDP and GNP

While Gross Domestic Product (GDP) and Gross National Product (GNP) measure the output of an economy, Gross National Income (GNI) is an indicator for the income realized by the residents of a country. According to the World’s Bank definition, “GNI is the sum of value added by all resident producers plus any product taxes (less subsidies) not included in the valuation of output plus net receipts of primary income (compensation of employees and property income) from abroad.”

How to calculate GNI

The formula frequently used in relation with GDP is the following:

The net primary income in this formula refers to wages and salaries gained by the residents of a country abroad, interest or dividends on shares, as well as the return of direct investment abroad or certain taxes and subsidies.

In this respect, GNI and GNP are quite similar, since both measure the total value of currently produced final goods and services in a country, measured within a given period of time, usually a year. However, GNI is a more frequently used indicator to estimate economic performances by the World Bank.

GNI used as a measure for living standards

While GDP growth is a widely used indicator to assess the economic performances of one or more countries, GNI is better for measuring living standards. What is more, when they are used together, GDP and GNI can reveal important information about the main factors driving economic growth and quality of people’s life. For instance, even though GDP may increase at fast pace, GNI can show a slower rise, due to a deterioration in the terms of trade, for instance, when prices of imports rise faster than prices of exports. Residents of the respective country will feel this gap since their purchasing power will increase more slowly than GDP.

Another reason behind a possible gap between GDP and GNI can be a population increase within a country. That is why GNI per capita is a more relevant measure for the living standards of the residents of a country, than GNI. Therefore, an increase in GNI per capita will be a better estimate of the improvement in net primary income to and from other countries. 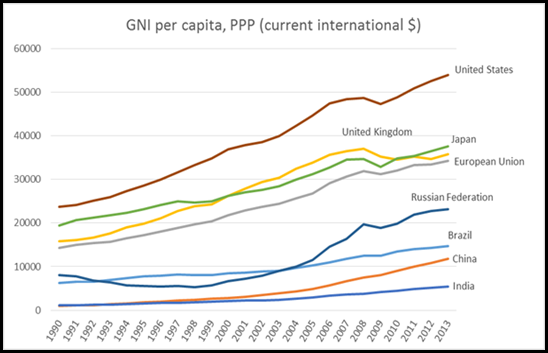 The Author is currently a student of Majors in Economics and Finance.