Introduction to Taxes and its Types

What comes in your mind when you hear or see the word “Tax” in your daily life discussions or on some news channel on T.V , newspapers etc ?. Have you ever thought how the Government gets financed and they pay salaries to employees ? Or pay pensions to retired employees ? The answer to all these questions is found in system called Taxation. When you go to market and  purchase a product or service in that particular market you pay a specific amount of tax included in the price of that commodity.

The word Tax came from Latin word “Taxo, Taxare” which means ‘To Asses Or Estimate’.

Tax can be defined in the following ways:

“A general purpose , compulsory contribution by the people to public  treasury to meet the expenditure of government is called Tax”

“A specific amount of money demanded by government from its Public levied on their income, sales, wealth etc.”

“Taxes are the price we pay for a civilized society”

The government`s most important source of income is tax revenue. Taxes are meant for the general purposes expenditures made by the government.

The tax base is the item or an economic activity on which tax is levied    OR  it is the Good or Service that is taxed. For Example : Income , Wealth , Spending power (Consumption).

Following are the different types of Taxes.

When the burden of money is on the person who is obligated to pay tax , this type of tax is known as direct tax or the amount of Tax which is levied on the income or wealth of person who pays it. It is called direct tax because government collects tax directly from the person on whom the tax is levied. For example : Tax levied on income is called income  now this tax will be directly deducted from that person`s  income and he cannot shift this (tax) burden to another person. Wealth tax and Land revenue taxes are also included in direct taxes.

Evasion : Direct taxes can be easily evaded because of dishonesty. People may show their income low as to get evasion from direct taxes. People do not show their real income and wealth.

If a person works hard and works for long hours and he earns a lot of money and his income is high then he will be obligated to pay high tax because tax rates will be higher for higher level of incomes so, due to these high tax rates he will tend to reduce his working hours in order to get rid off high taxes. This will also affect their working capability and production will be reduced overall in an economy.

In an Indirect Tax the initial money burden is on one person who is obligated to pay the tax but the final burden or incidence is on the some other person. Unlike , direct taxes the person is not directly paying the taxes. In indirect taxes one person shifts the burden to other person. For example : In case of sales tax , firstly some amount of tax is paid by the businessman but then the businessman shifts the tax burden to his customers. The businessman raises the prices of its commodity and when the buyers buys that particular commodity at higher prices , all the tax burden is beard by the final buyer of that commodity  not by the businessman. So, these types of taxes are usually known as indirect taxes because the person who is obligated to pay the tax pays less and shifts the burden to another person who is legally not obligated to pay the that tax. Indirect taxes include custom duty, excise tax , sales tax etc. Taxes imposed in commodities are generally known as indirect taxes because the final burden is beard by the  buyer of commodities. Sometimes direct taxes may become indirect . For example  If Tax on income of teachers increases  (Income tax is direct tax) the teacher will charge high amount of fee from his students for his services which he deliver during teaching hours and through these high fee he will shift the burden on is students who are legally not obligated to pay those taxes or in other words one can say the teacher compensate the high taxes which are levied on his income through charging high amount of fee from his students .

The tax rate structure tells us the relationship between the tax base and amount of tax collected during a given accounting period. The tax rates are calculated   as the ratio of taxes paid to various values of the base.

The average tax rate (ATR) is the total amount of taxes collected by government divided by the value of tax base.

Marginal tax rate (MTR) is the additional amount of tax collected on additional value of tax base,  as tax base increases

On basis of tax rate structure , taxes are classified as 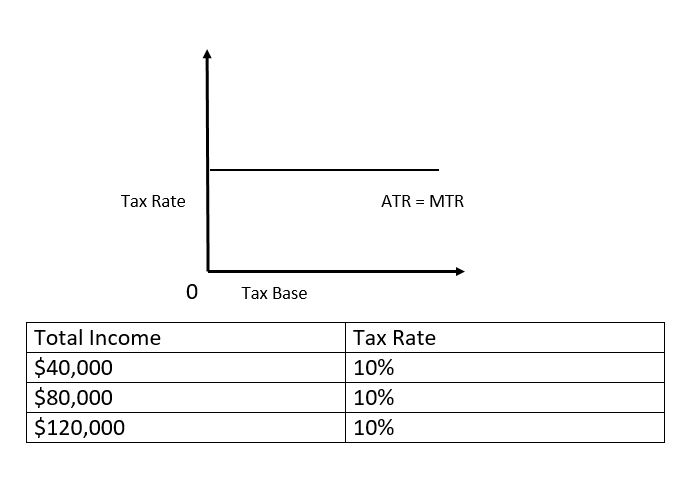 Economists use the term Tax bracket also which gives the increment of annual income associated with the marginal tax rate (MTR). Tax bracket shows the taxable income. Let`s look at the table below: 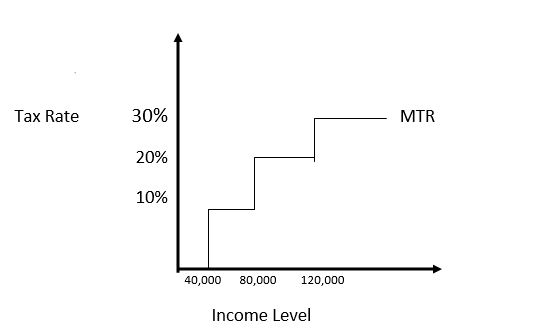 Average tax rate increase with income or tax base.

Other types of Taxes

A kind of tax which taxes all components of economic base. There is no exclusion , exemption or deduction from tax rate or tax base. For example: General income tax which taxes all sources of income. Wealth tax will tax all kinds of wealth one owns.

Selective tax only taxes certain specific portions of tax base. It may tax your income you earn from part time job but not other sources of your income.  There is exclusion, exemption from general tax base.

Tariffs are taxes imposed on internationals trade. When you trade with another country`s individual and you import or export commodities then you have to pay tax for that economic activity which is known as Tariff. Tariff is always imposed on an individual`s economic  activity involved outside country`s boundary.

Excise tax is type of tax in which tax is imposed on sale or production of particular good or service on producer of that good and service. Or it is tax imposed on god which is to be sold.

Sales Tax is imposed on sale of goods and services by the government.

A payroll tax is the one in which tax is deducted from one`s salary by the employer.

Earmarked taxes are special taxes designed to finance government supplied services. For example: Taxes on petrol , by collecting this tax the amount of collected tax will be spend on construction of new roads and maintenance of current roads.

The fixed amount of tax a person pays per year is called lump-sum tax. The tax is paid irrespective of one`s income level or consumption or wealth he owns. These taxes will reduce the purchasing power of consumers of different goods and services.

It is kind of tax imposed on consumer spending.

Goods and Services tax is imposed on the goods and services sold  for domestic consumption by the government.