We have been discussing about Demand curve of  product with changes in its price and Quantity Demanded depending on different Situation. Let us now be more concerned about Individual Consumer Demand Curve whose decision are affected by the limited budget it has. So let me explain how and why !

A curve which is made after various combinations of utility Maximization because of a changes in the Price of One Good while the other remains constant. 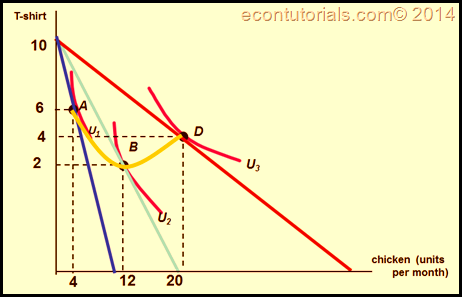 As discussed earlier, a Decrease in the Price of Chicken has increase the consumption level of the Consumer.We have a movement in the budget line and each Indifference Curve is Tangent to the Budget line having consumers best possible decision for the consumption of T-shirts and Chicken with further decrease in Price.

The Point A,B and D after combining Makes the Price Consumption Curve. This shows that with each decrease in the Price of the Product the Consumer changes its decision for the level of consumption of Chicken.

Up next: Normal Versus Inferior Goods