Although GDP is commonly used to measure the size of an economy nowadays, Simon Kuznets, the economist who created this tool has warned against its use as a measure of welfare. Commissioned by the US Congress in 1934 to create a system that would monitor the productivity of the United States of America, Kuznets proposed the GDP or Gross Domestic Product. However, this metric aimed only at capturing the economic output of individuals, companies, and government in a single measure which would increase in good times and decrease in bad times.

Before GDP was born and until the Bretton Woods conference, in 1944, the standard tool to measure a country’s performance was the GNP or Gross National Product. In contrast with GDP which measures the output of a country realized by people living within its boundaries, GNP estimates the production realized not only by citizens living within the country, but also by those living abroad.

Nevertheless, decision makers gathered at Bretton Woods, in New Hampshire, US, concluded that the GDP is a better measure of a country’s economic performance in the new global framework regulated by the World Bank and the International Monetary Fund. Implemented in the aftermath of the Global Crisis and World War II, GDP has become largely known and utilized by all major economies around the world. Undergoing severe effects of the crisis, these countries wanted to better assess the monetary value of their final goods and services (see Figure 1, Source World bank) 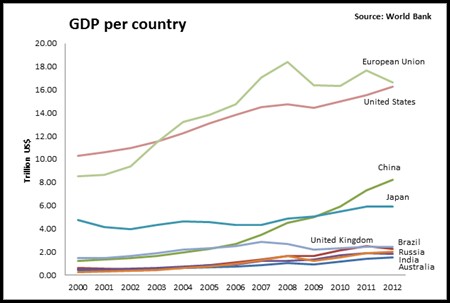 In recent years, especially after the financial crisis in 2007-08, economists and policy makers have noticed more and more limitations of GDP. For instance, GDP does not tell anything about a country’s sustainability, as Joseph Stiglitz, Nobel Prize winner economist, points out. Therefore, while fast-growing countries such as China may show skyrocketing values of GDP year after year, these values do not reflect the compromises done in terms of environmental degradation.

Moreover, GDP does not reveal anything about the standard of living and the overall well-being of a country’s population. Although GDP per capita is often utilized to show how much the average citizen in a country is better off than the average citizen in another country, this measure does not say anything about the distribution of wealth. Nor does it show how much leisure time residents of developed countries give up in order to participate to the economic output.

To overcome the limits of GDP, the United Nations computed several other indexes which account for factors such as life expectancy, literacy, and school enrollment. These are Human Development Index, Genuine Progress Indicator and the Gross National Happiness Index. While they also have limitations and critics argue that GDP is still the most robust and easy to compile measure of an economy’s productivity, there is a clear tendency towards replacing GDP, as we know it.

Another tendency among economists and statisticians from organizations such as OECD and World Bank is to strengthen GDP as an indicator. In this regard, there are reforms to include spending on research and development under investment done either by the private sector or by the government. Currently, this type of expenditure is considered an immediate consumption of resources which does not reflect its contribution towards the economic growth of a country.