What is GDP growth rate and how to calculate it

Since the media often talk about the growth rate of an economy, it is important to clarify and to correctly define what the growth rate of GDP is. This indicator has a lot more meanings and it can be used to measure different components of a country’s economy. Nevertheless, it generally gives an idea of the economic growth or the economic decline.

Just like any other growth rate, GDP growth rate represents the percentage change in GDP over a specific period of time. The formula can be seen below:

GDP growth rate can be expressed in nominal terms, as well as in real terms. The latter is often known as real GDP growth rate. This is a measure of a nation’s GDP growth from one year period to another, expressed as a percentage and adjusted for inflation.

While it is quite difficult to compare GDP of two or more countries, since they can be computed differently, it is far easier to compare GDP growth rate. No matter the method used to calculate GDP, GDP growth rate actually shows how performance of  a country is in terms of working out those factors that drive GDP.

Just like GDP can be calculated using several approaches, real GDP growth rate can be computed as the annual growth rate of GDP volume. Hence, GDP at current prices is valued in the previous year prices, so the computed volume changes are imposed on the level of a reference year. This is called a chain-linked series. The advantage of using this method is that price movements will not inflate the growth rate. 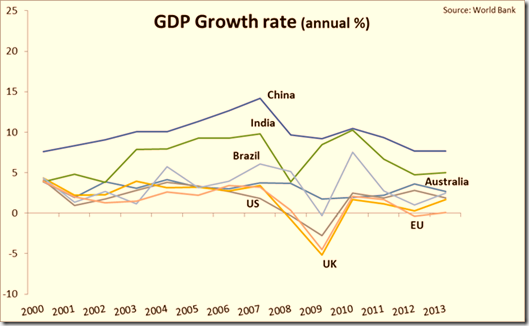