To understand the game theory , one must be familiar with the exact definition of word “Game” . The word game means “ Any physical or mental activity that humans do for the sake of pleasure or simply the competition between two players”. So, these players perform some action during that game. In case of economics the action will be like how much quantity to produce? how much to supply?, what price to charge? etc. Players actions depend upon strategies as well, because strategies are basically the options available for the players while taking any of that action.

For example, in a game of football there are 11 players on the pitch and 3 substitutes are allowed during the match , the strategy made by the manager is attacking , then the players on the pitch will follow the same strategy and try to attack as many times as they can in 90 minutes.A game always has some rules and we assume that players have enough knowledge about the basic rules of the game. and we also assume that each player wants to maximize his payoff. Payoff here means the number which determines the actions taken by the players.

From the above example we are able to conclude that strategic behavior is set of players` actions in order to maximize their payoffs.  So, game theory studies strategic interactions between players. Game theory actually provides us a good way of thinking about the competition among few firms. It tells us how individuals will behave and how their payoffs will be affected by the decision made by each of them.

There are two types of representing a game theory:

A Strategic form is a solid way of representing a game in which players together choose their strategies. The resulting payoffs are presented in a table with a cell for each strategy combination.

An Extensive form describes this theory with the help of a tree-like structure that explains how a game is played. It characterize the order in which players make moves or perform actions with strategies available, and the information every individual player has at each decision making point.

To explain it in the most simplest way. Lets have a look at the example below.

It is a situation of Edward and john who are two criminals. They  have been caught by police but the police don`t have sufficient evidence against them. So what  the police will do to find out if john and Edward are criminals. The police have to try and to get them to confess because the police don`t have sufficient evidence. So lets suppose John and Edward are taken to two different investigating rooms, and both the criminals are given two options, whether to confess or deny. Now both are also told that if they both confess ,then they will get fours years in jail each of them. So, we have -4 and -4 in above diagram column3 row 2. Now if John confesses and Edward denies, then John is going to get 0 years in jail, and Edward will be in jail for 6 years. Now if John denies and Edward confesses then Edward is going to get zero years in jail whereas, John will be in jail for six years. what if non of them confesses? So it means they both will deny and each of them will get 2 years in jail because the evidence is not sufficient.

It is the normal form of game which tells us who the players in the game are? In this game Edward and John are the players of the game. Now the pay-offs will depend actions undertaken by John and Edward and their action will decide who will get jail for how many years. 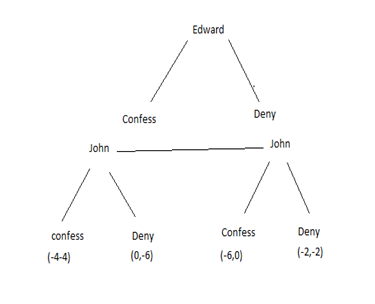 In the extensive form, the game is describes by a game tree it starts from the top and goes downward. The dominant strategy for both Edward and john is to confess. Because confessing is better than denying at all times.