The economic inefficiencies of monopoly can also be regarded as demerits or disadvantages of monopoly. Monopoly is definitely a harmful element of an economy as a single firm rules over the economy and sets the prices of commodity, which has no substitute in the market, according to his wishes. And do not let any other firm to enter in industry to carry on its business and earn profit. These all factors show that a single person or firm enjoys extra ordinary profits at the expense of others.

The most common economic inefficiencies which are caused by monopoly in an economy are as follows;

A monopolist always works on a large scale. It always has a large capacity for production. Due to this, a monopolist does not produce at optimum level, which implies that the level at which average cost is minimum. A monopolist ha excess capacity that is why he can afford production even at high price. This concept will be more cleared with the help of following graph; 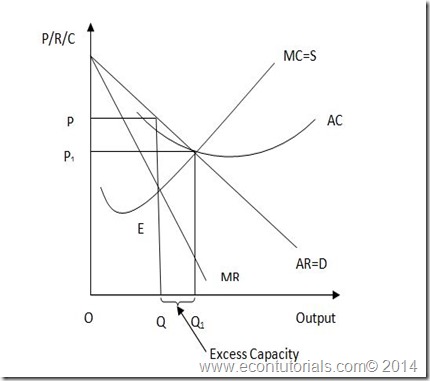 In the above graph, it is visible that the monopoly firm can produce OQ1 quantity but it produces OQ quantity. The excess capacity is equal to the difference between OQ1 and OQ.

In case of monopoly, the monopoly firm is always productively inefficient. This happens because a monopolist does not produce at minimum average cost. In monopoly, the production is made at a level which is less than minimum average cost due to which less quantity is produced and higher price is charged. This phenomenon can be better explained by comparing monopoly with perfect competition. The following graph will help you to understand the productive inefficiency in monopoly. 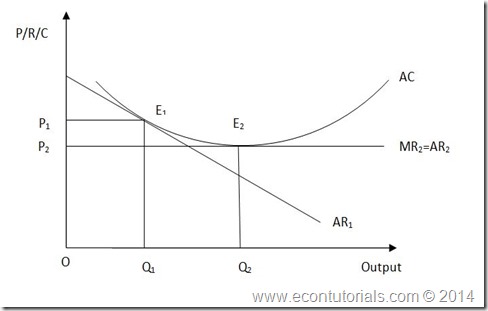 Where for normal profit AR=AC. The average revenue curve for monopoly is AR1 and for perfect competition the average revenue curve is AR2. The AR1 of monopoly firm is equal to AC, its equilibrium is at E1 at which it is producing OQ1 quantity and is charging OP1 price. Whereas, AR2 of the perfect competitive firm which is equal to AC, the equilibrium point for it is at E2. It is producing OQ2 quantity and is charging the OP2 price, which is lower than as charged by monopoly firm.

The monopoly firm creates entrance barriers for other firms to enter in industry and do business. This is very harmful for the economy and for the consumer too. As it form the situation in an economy where no substitutes are available for the consumer at competitive prices.

It the usual practice of monopoly firm to earn supernormal profit in long run, which is again a disadvantage to the economy. Price discrimination implies that different prices are being charged for the same product. In monopoly, the price discrimination is kept by the monopolist, which is totally against the interest of the consumer.