Difference between GDP and GNP

Although both GDP and GNP measure the size of an economy, either for business or economics forecasting purposes, they are not one and the same thing. Therefore, one should not be confused by their similar terminology.

Simply put, while GDP looks at the strength of a country’s local economy, encompassing not only residents, but also immigrants and tourists, GNP focuses on the economic performance of the nationals of an economy, no matter if they live within the country borders or abroad.

Formulas of GDP and GNP

To be even more precise, one can look at the formulas (1) and (2) below, used to compile GDP and GNP.

Looking at the formula above, where GDP is calculated using the expenditure approach, one can infer that GDP and GNP have an area where they intersect, while also showing major differences, as the ones expressed above. What is more, with the production approach, GDP represents the total value of products and services within the territorial boundary of a country, whereas GNP represents the total value of goods and services produced by all nationals of a country, whether within or outside the country.

Example of GDP and GNP

Despite the fact that there are significant differences between GDP and GNP, these indicators can be compared, in order to study the relationship between a country’s economy and its exports, for instance. If an American company such as Google has a foreign subsidiary in China and this subsidiary exports goods and services totaling $1 billion to Europe, the $1 billion will be added to the GDP of China and to the GNP of the United States, since the export is done by an American company.

Another way to differentiate between GDP and GNP is by thinking about the exploitation of natural resources. Take the example of a foreign company going into a country with modern infrastructure to take out coal from a mine. While the royalties can be as low as one or two percent, meaning that the respective country will only get a small share of the profits, its GDP will substantially increase. However, the GNP shows that most of that profit does not remain within the country, but it goes to the foreign country with the better performing infrastructure. 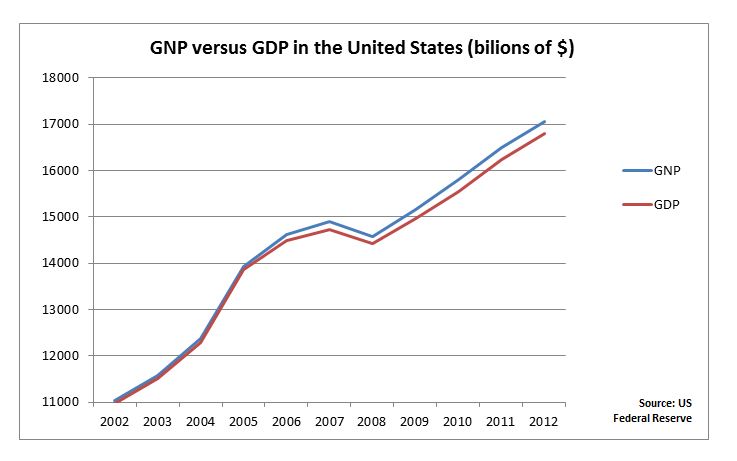