Every Economy has a certain level of potential capacity of producing something and cannot produce more than that capacity.

Demand-Pull inflation arises when the aggregate demand increases more than the economy’s potential for productivity which leads to rise in Prices so as to have have a new new equilibrium with the Aggregate Supply.

As I explained that further production for an economy is not possible so an increase in the aggregate demand would only increase the price of the available products and not the Production level. IN other words when Aggregate Demand for goods and Services increase, individuals bid over the limited quantities available. Hence, the price of the available products and Services Increases. Additionally, Employment level falls and wages rises that increases the inflationary process rapidly.

There are various factors that can give rise to Aggregate Demand. One of the common factors are:

One general example can be taken when there are economies which tend to increase their Government Spending and are than dependent over the monetary institutions to Print more money to offset their deficit that as a result Increases the Aggregate Demand. 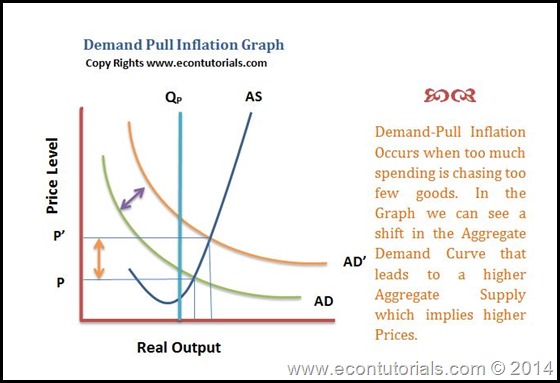 There are not only increases in Price levels because of Demand but also because of Costs.

Increase in the Price Level due to a rise in the costs that as a result pushes up the Aggregate Supply is called Supply-Shock Inflation or Cost-Push Inflation.

Stagflation is a situation in which the inflation and unemployment rates are high and productivity levels fall.

With reference to the book of Samuelson Nordhaus “ It can lead to a Policy Dilemma of Stagflation when output declines at the same time when inflation is increasing”.

It will also be a failed choice if monetary policy is tightened (contracting money supply from economy)  because that will lower the Output levels even more. So in such a situation, policy makers argue that only one factor can be saved, either Price level or the Output by the use of only one instrument, Aggregate Demand.

Such are the complexities of running an economy….