For example, if we toss two coins, the occurrence and non-occurrence of a head one coin does not in any way effect the occurrence of a head on the other coin. Thus the two coins are independent. Similarly, suppose event A is the drawing of an ace from the pack of 52 cards and event B is throwing a total of a 7 with two dice. The event A and B are independent because drawing of a card does not affect the throwing of a total of 7.

If we interchange the roles of A and B and if P(A) ), then the conditional probability of B given that A has occurred, denoted by P(B I A), is given by

A fair die is rolled once. Given that the outcome is even , what is the probability of getting a number greater than 3?

Since a die is fair, we assign a probability of 1/6 to each sample point. Thus P(A) = 3/6 and P(A  B) = 2/6. Using the definition of conditional probability, we can now determine the probability of getting a number greater than 3  given that the outcome is even as 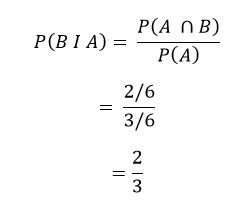 This result can be verified by the fact that out of three even outcomes {2, 4, 6} only two are greater than 3.

To understand the complete topic of probability, read the following lectures below.