Can We Still Define Banks Nowadays?

According to literature in the field, the following definition is widely accepted: “a bank is a financial intermediary that offers loans and deposits, and payment services” (Casu, 2006)

However, nowadays banks have diversified the range of services they offer and their operating methods, to such an extent that this definition, although quite recent, does not offer a complete perspective anymore of what a bank really is.

In countries such as Japan, France and Germany, where banks provide around 20% of the corporate financing, it is known that banks are making significant effort to develop a relationship banking culture, with long-term loans and preferential interest rates for clients with a ‘good history’. These economies can be called Bank-Based Economies.

There are also countries where the borrowing-lending activities take place through organized markets, such as London Stock Exchange, in the UK, or New York Stock Exchange in USA. These are known as Market-Based Economies. Although banks are present in these countries, they are highly competitive, the relationship with lenders and borrowers is purely limited to the transactions of granting loans or taking deposits and loans are usually granted on short-term.

Economists have long disputed which system is better than the other, often comparing GDP growth in bank-based financial systems with GDP growth in market-based financial systems. A recent study from the Bank for International Settlements shows that in bank-based economies, real GDP growth per capita is superior to the one in market-based economies, for emerging market economies (EME). The authors of the study further argue that banks and markets both contribute to economic growth, but up to a point. After a certain limit, neither bank loans, nor bonds from the market do not lead to real GDP growth. Not only does GDP growth per capita decline for developed economies, but markets seem to have a greater contribution to the economic performances than the banks, in developed countries. (Gambacorta, 2014) 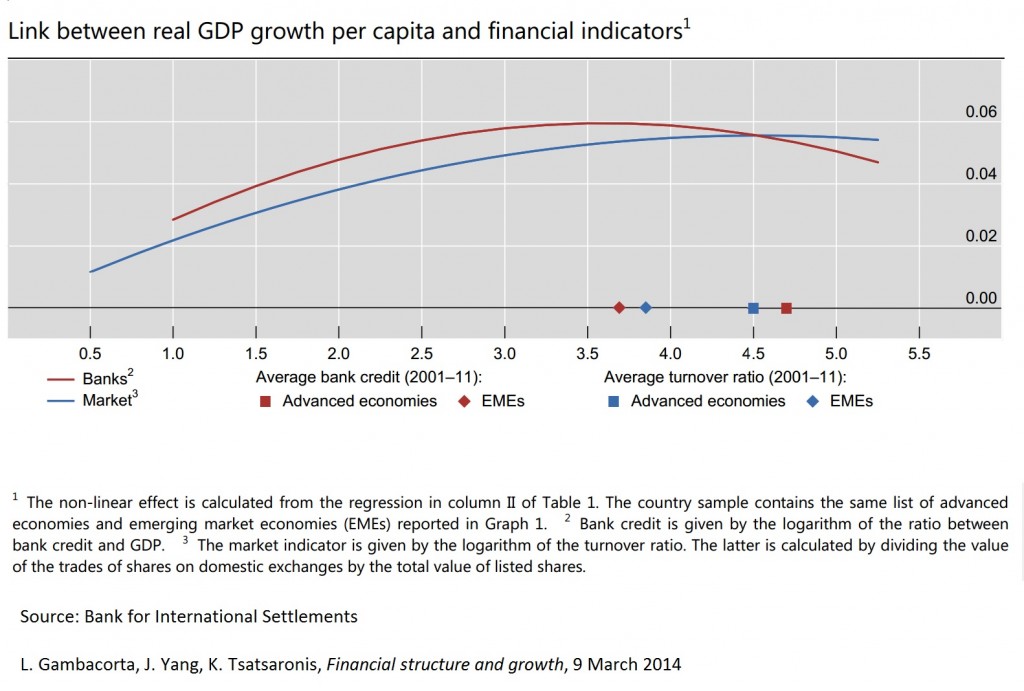 The competition between the bank-based financial system and the market-based one is starting to lose terrain nowadays, due to globalization. The clear separation between the two types of financial systems is slowly fading, since banks have become active players on the organized markets. In addition, banks are constantly changing the way they are operating as financial intermediaries, moving from the ‘brick and mortar’ concept of bank towards an almost exclusive electronic presence.