‘Salary’ is a word derived from salt, salt was used as a mean of payment in the Roman empire for many years, later in the mercantilist Era a mean of storing wealth was gold but no theory of money was known in that time so as a consequence a wave of inflation was born in Spain caused by the gold extracted from Mexico in the XVI century, reaching most of European countries of the time.

As a result of metals weight, the demand of credit in different places, and the few financial institutions that had money, came to be the fiduciary note, which was a paper marked by this few known institutions, it contained the amount of gold a money holder had in their vaults, this way the saver had no longer the need of carrying himself all that heavy coins around.

This is how money in the form of paper was born.

Store of value: Money is used as a way of sending value to the future, this value gives us purchasing power to any period of time we foresee, but is not perfect, if prices raise, we will lose value, by inflation or by interest rates in the economy.

Unit of account: Every person in the economy can tell approximately how much of any good he can buy with 1 unit of fiat money or currency, this is also what it is for, it gives us a ruler to evaluate the purchasing power we have and the value of goods we want to have, by comparison we decide to make the transaction or not.

Medium of exchange: When we enter a store we are usually confident that the cashier will receive our money in exchange for the items that are for sale, and if we go to another store the same will usually happen. The ease with which money can be transformed into other goods is what gives it this function, money is the perfect definition of liquidity on an asset.

The famous Fisher’s equation is the flag and heart of the monetary economics, it basically means that there is a direct relationship between the quantity of money in an economy and the level of prices, increases in its supply reduces its value which reflects in inflation.

There are many variants and extensions in the use of this theory that in turn are the underlying reasons for different policies a government or a central bank can implement.

M stand for money supply, V is the velocity of money or the average frequency of transactions and the sum is the price and quantity of the good indexed by i but normally we will find it as:

To have a glance to the different policies that are available to control an inflation lets pick some of the main assumptions about money, even today there is a huge debate about the real nature of money in the economy and is not easy to tackle this subject without leaving many authors and important results unnoticed.

Money neutrality is the idea that a change in the stock of money affects only nominal variables in the economy such as prices, wages, and exchange rates, with no effect on real variables.

Superneutrality is a stronger than neutrality. It holds that not only is the real economy unaffected but also that the rate of money supply growth has no effect on real variables.

Now what can a policymaker do about an unexpected high inflation? It depends on the model he’s been working with, for example, the monopoly of money printing that a central bank has, gives to the government the ability to tax uniformly the householders by the concept of seigniorage, if an external phenomenon results in a shock in the international currency market that makes the domestic currency to rise its level of supply, the government can stop injecting money by printing it, if the inflation is too high, it should analyze the cost of reducing government expenditure with the benefit of maintaining a stable inflation rate.

By thinking this way we are talking about the cost of a high inflation in the short run, and making no use of the money neutrality assumptions which are mainly used to explain the long run. Now in our example the money supply is raising and not only have the government stopped transferring money to the economy in the form of, let’s say, pensions to the older generation, the bankers are also changing the interest rates because there is more money in the economy, causing changes in the credit market and thus the investments with a final effect on the production level of the economy.

Inflations are not as bad as we might believe, many countries have adopted a stable level of inflation to collect enough revenue for their expenditure, which is the case of economies with a high level of informal activity, or when a sector of the economy is booming with high growth rates, as the middle class in underdeveloped countries, a policymaker can make use of the next two graphs to tackle its problem: the Laffer curve and the Philips curve. 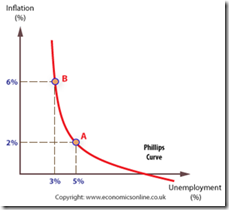 Whether the central bank is full of Keynesian economists or monetarists, the nature of the policies that will come out of their debates, usually there is always a number of both and by arguments backed with statistical data they come to decisions about the actions to take over.

Inflations are a result provoked and also a phenomenon to control and since it affects the real variables in the short run, expectations of the future are also affected, playing a big role into the policymaking task where neutrality might be taken more seriously and looked for with econometric models.

What Is the Quantity Theory Of Money?