Through time, different views of how the economy works have shaped theories that aren’t equal in their assumptions, which correspond to the attempt to resolve the biggest questions that where unanswered at the time, and often were problems that policymakers were trying to fix for the sake of society itself, not only as part of scientific endeavor.

The aggregate supply (AS) curve is going to show us the production of everything inside the entire economy. We will discuss this concept by chronological order starting with the long run or LRAS which is the theory developed by the classical economists before the Great Depression when Keynes developed his model know by his own name.

Classical or liberal economics is a theory of self-regulating market economies governed by natural laws of production and exchange. The wealth of any nation was determined by national income which was in turn based on the efficiently organized division of labor and the use of accumulated capital.

Its policy advocates the freedom of the market, with the state providing for the common good,Acknowledges that there are market failures.

Promotes the Progressive tax, warns the danger of monopoly and celebrates competition. On international trade, finds benefits from it, distinguished from protectionism.

Knowing the ambient where the theory of AS develops we are in shape to unfold its contents. The classical model of AS describes how the economy behaves in the long run. It is known as an inelastic supply curve because production inputs are fixed causing the output to be fixed:

This is a result of two important classical properties, the economy satisfies the classical dichotomy which means that money is neutral causing the inelasticity of the curve and the full employment or natural level of output where the resources to produce are not wasted, we can say that unemployment is at its natural rate as a need of reality in the theory.

By the self-regulating nature of economy reflects in the wages and prices, when things are going good wages rise together with the prices and when the economy is at contraction wages and prices go down. 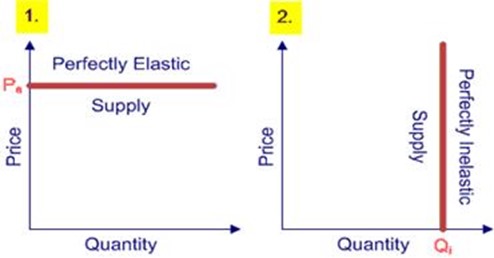 The implications of an inelastic supply curve are that any deviation from full unemployment are temporary, the economy will always go back to it, and that any increase in the aggregated demand will only cause inflation meaning that it will only increase prices and wages but not the real GDP. 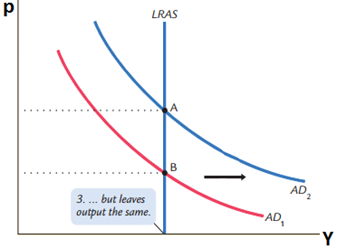 And as the economy regulates by its own the government policy has little to do in this model often known as with the property of ‘laissez-faire’ that means, let them act, let do. Also it is placed little emphasis on the use of fiscal policy to manage aggregate demand.

The classical view suggests the most important thing is enabling the free market to operate. This limited direct role for government had deep roots in the abundant historical evidence of abuse of concentrated political and economic power by governments.

That this power would typically be used to reward friends and punish enemies was taken as self-evident, causing general aversion to direct economic participation by the government.

Public sector actions to promote economic prosperity are doomed to failure according to the classical analysis.

At best, government involvement is ineffective; at worst, it can undermine the engine of economic. This classical theory of limited government effectiveness and abuses of public power, came to dominate economic policy-making for almost a Century. Keynes and his followers were the first to provide a substantive and careful counter-alliance of facts and theory to rival the authority of the orthodox classical view.

The most known theory of AS in the short run is the one of Keynes, after the classical theory Keynes had to face the great depression coming up with a theory that had to be different.

Keynes argued that the economy couldn’t be let to freely adjust as before, in a way that the government had to play a bigger role in the economy.

Interventionism through fiscal policy was needed to ensure macroeconomic stability and to set a better ground for the invisible hand (the auto regulating mechanism for the classics) to function.

Keynes observed that the economy is not always at full employment. During the Great Depression, unemployment was rampant, many businesses failed and the economy was operating at below its potential. He gave the next reasons: 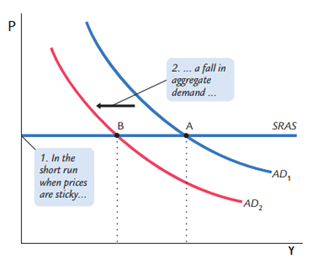 Because of a fall in the aggregated demand there is a negative multiplier effect that causes others that had not being affected by the depression to reduce their expenditure which at overall creates a snowball effect. In a similar way an expectation arise, people lose confidence and therefore save more, spending less which in turn causes a further fall in demand.

To introduce the concept of the full potential of the economy we can introduce a new graph that pictures it, in the same vein of Keynesian macroeconomics. This gives us a bigger picture of the model and more accurate. Now starting with a low economic activity like in a depression as the great one, the expectations are bad so nobody wants to spend more than they need, keeping the aggregated demand at low levels.

This is when the government saves the day with expansionary fiscal policy that brings the government expenditure up, shifting the aggregated demand outwards and terminating the snowball effect of bad expectations. 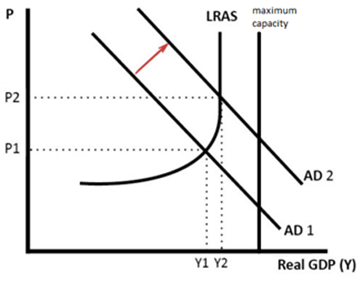 The graph shows a supply curve that pictures the maximum output possible in the economy which is that one when there is nobody unemployed and all the capital is fully used. We can appreciate that if the demand curve keeps shifting outwards for whatever reason the supply curve will hardly go pass the natural rate of unemployment where the curve goes perfectly inelastic, meaning that any increase in the quantity demanded will only cause inflation. We can relate this to the Phillips curve previously studied.