Basic Economic Goals of a Country

All the countries around the world have certain targets for becoming an ideal and economically stable nation. Countries strive hard to achieve such targets or goals. Each country has its own issues associated with various factors that halt its development and growth.

Hence, countries tend to keep certain goals and target to achieve a particular level of growth within a year. Such goals are referred to as Macroeconomics objectives. Following are the economic goals of a country in general;

Are you interested in creating an Academic Blog just like econtutorials.com? Check my detailed step-by-step tutorials of creating your own blog in 2018

Additionally, It is the biggest challenge for every country to fulfill the needs of its growing population and then also export its products to the rest of the world.

Real growth means the increase in the production of goods and services which is only possible when existing resources are being allocated efficiently. Those countries which could not achieve the economic growth are because of two factors.

The following graph shows the growth. When the available resources are utilized wisely than the output of machines increases as a result of which the combination for goods and services (P, Q, and R) on production possibility frontier (PPF) is shifted towards the right (from PPF1 to PPF2) without any opportunity cost which shows growth. 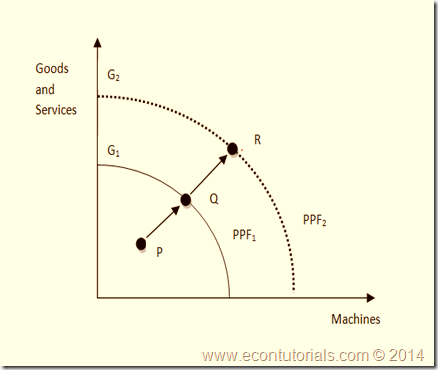 Inflation means a general increase in price level. Increase in price level results in an unequal and unfavorable distribution of wealth in an economy. Due to inflation the growth rate also decreases. It reduces purchasing power and it also causes a deficit in the balance of payment which effects the international repute of the country. Therefore, the government of a country takes a serious and effective step to overcome inflation and to keep the prices of commodities stable.

4. The balance of payment:

Economic security refers to a feeling of freedom and safety. The people of a country feel themselves safe no matter wherever they are in their homeland. It is the responsibility of the government of a country to provide security of life and belongings of their people. That is why government establishes defense including police for the protection and security of the natives.

Economic freedom is a freedom for people to make choice and decisions without any kind of external pressures. People are free to buy, sell and own. People are free to own property and make profits from them. People have the freedom to do business and expand or contract it. Economics freedom is provided to people to promote economic activities in an economy to make economic condition better day by day.

Efficiency is measured with respect to a time frame. One is efficient if he does maximum work in less time. Economic efficiency is the best utilization and allocation of available resources. An economy is economically efficient when there is maximum benefits are available for the people. Economic efficiency is achieved when available resources are used wisely in such a way maximum goods and services are being produced. An economically efficient country is more favorable internationally. Other countries rely on such country’s quality productions and services.

Economic equity is one of the economic goals of a country to treat everyone equally and fairly and do justice. It is the duty of government to keep balance and equity among different classes of society. The government should form and establish such economic policies which help them in minimizing the class discrimination in the society. The country with less discrimination flourishes with better speed. In order to achieve the goal of economic equity there should be fair and just distribution of income. The wealth should be accumulated or concentrated in certain hands. Every sector of an economy must be audited on regular basis so that cash flows could be regulated. Economic equity is very integral part because it helps the business chains to keep functioning smoothly.

Every country is required to pay maximum attention towards keeping the prices of goods and services stable. The government should formulate such policies which prevent price fluctuations and they the markets in balance and consistency. Economic stability also includes full employment level in the country, which no one is jobless unless he himself does not want to be employed. An economically stable country is the one which is heading towards growth and prosperity, slowly and steadily.